Bath has designed scores of municipal water pumping stations.  Historically, we have served as either the prime consultant or the electrical/instrument consultant for the water works projects.  The partial list below describes a few of our pump station projects.

Memphis Pump Station
A new pump station was constructed with six vertical turbine pumps.  The project was located on a very congested site, so care was taken to assure sufficient access for maintenance and operation.

Festival Pump Stations and Reservoirs
The municipal water system in El Paso makes good use of the natural elevation variation between its water sources and the mountains that bisect the city.  Water is pumped from two underground aquifers and the Rio Grande River to storage reservoirs on the mountains.  The reservoirs are located at various elevations on the mountain to create water pressure service zones.  A state park and an environmental protection area make building reservoirs and pump stations on the west side of the mountains challenging.  When El Paso Water Utilities began planning the construction of three new storage and pumping facilities in the west central part of the city, it turned to Bath for project management services.  The Festival Project consisted of three pump stations, two in-ground concrete reservoirs, and approximately two miles of 24-inch transmission main. The facilities are controlled from a central control station via a SCADA system.  Equipment for the project included four 1,200 gpm pumps, two 1,000 gpm pumps, two 700 gpm pumps, two 960 gpm pumps, three 75 gpm pumps, one 2,000,000 gallon reservoir, one 500,000 gallon reservoir, one hydropneumatic tank, and two miles of 24-inch transmission main. Design and construction were complex because the pump stations and reservoirs were located near a pristine state park and one reservoir site was in the Planned Mountain Development which is restricted by very rigid building guidelines.  Bath’s innovative solution was to design the facilities so that they blended with the natural beauty of El Paso’s desert mountains.  Native rock was used to veneer the structures.  Before construction began, a botanist was retained to guide the salvaging of native vegetation which was stored in on-site nurseries during the construction period. 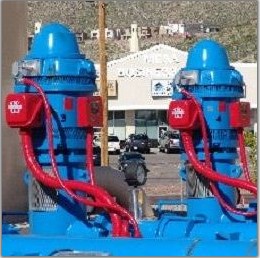